Instructions for setting up a Tiny Thermal Receipt Printer - TTL Serial / USB on a Raspberry Pi. And how to program it with Python! 😊

Step 2: Connecting with the Raspberry Pi and Installing Drivers

Instructions are from here under the "Install Software" section. 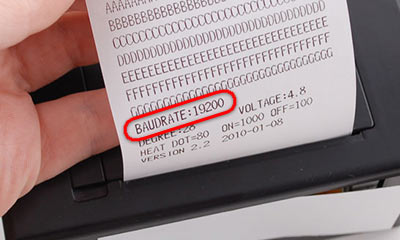 I lost my paper with the baud rate, or it wasn't included:

What does everything in printertest.py do?

The most important parts are the beginning and end. The rest is pretty self explanatory. It will print certain things out depending on what options are set. Run it, take a look at the test paper, and compare it to the code to see what it does.

#!/usr/bin/python < Declares that the script is written in Python

printer = Adafruit_Thermal("/dev/ttyUSB0", 9600, timeout=5) < Assigns the printer variable to the receipt printer, which can be found at /dev/ttyUSB0 and has a baud rate of 9600.

printer.wake() < Calls wake() before printing again, even if reset

The text is blurry or faded:

Run calibrate.py (in the same folder as printertest.py) and follow these directions:

Run calibrate.py before using the printer for the first time, any time a different power supply is used, or when using paper from a different source.

Prints a series of black bars with increasing "heat time" settings. Because printed sections have different "grip" characteristics than blank paper, as this progresses the paper will usually at some point jam -- either uniformly, making a short bar, or at one side or the other, making a wedge shape. In some cases, the Pi may reset for lack of power.

Whatever the outcome, take the last number printed BEFORE any distorted bar and enter in in Adafruit_Thermal.py as defaultHeatTime (around line 53).

You may need to pull on the paper as it reaches the jamming point, and/or just abort the program, press the feed button and take the last good number.